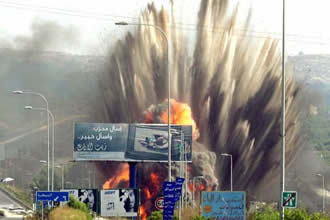 ST. MORITZ, Switzerland—The secret globalist group “Bilderberg” called for a big war by expanding the turmoil in Libya into a full-scale conflict involving the entire Middle East except for Israel. This is a grim and bloody outlook, because, historically, every time Bilderberg orders war, the guns begin to shoot. In 1991, President George H.W. Bush followed orders and attacked Iraq in Persian Gulf War I. He lost to peace candidate Bill Clinton, who followed orders and invaded Yugoslavia.

The list is endless: Every war dating back to and including World War II has been ordered by Bilderberg. Although they did not start calling themselves Bilderberg until 1954, Rockefeller and Rothschild cronies had the ear of President Franklin Roosevelt when the White House baited the Japanese into conducting a surprise attack on Pearl Harbor on Sunday, Dec. 7, 1941.

Similarly, President Harry Truman was pressured into going to war in Korea, and then Lyndon Johnson involved the U.S. in Vietnam.

Johnson seemed to enjoy cruelty. The same draft law used in World War II had been revived in 1946, making all able-bodied men aged 18-38 eligible for combat. A college student could finish his degree but must then report for duty. As a matter of policy, LBJ said students could finish their entire education, including postgraduate work, before reporting. And no one older than 27 would be drafted. The result: Dick Cheney and others avoided service by remaining in college until the age of 27. So the body bags were mostly filled by young boys with no more than a high school education.

“It will have to be a big war involving several countries to advance our goals of a global economy,” said Keith Alexander, director of the U.S. National Security Agency. “But the pressure to end the war in Libya is non-stop, mostly because of that damn Kucinich.” He was referring to Rep. Dennis Kucinich (D-Ohio), whose bill to end the invasion of Libya was defeated just before Congress adjourned for a week on June 3.

“But look at all the votes [148] he got,” Alexander said. “This is dangerous. Congress may cut or even eliminate war funding, and our soldiers are not even fighting.”

Bilderberg’s goal of expanding the turmoil surrounding the invasion of Libya into a huge bloodletting in the Mideast will be helped, they say, by their plan to maintain the global recession through 2012.

“The recession may keep coverage [of Bilderberg] down,” said John Kerr, a member of the British House of Lords and deputy chairman of Royal Dutch Shell. “Europe has many independent papers, but they go low-budget. We have made calls to Rupert Murdoch, still our good friend,” he said of the world’s largest owner of newspapers.

Kerr and the others were to be bitterly disappointed when confronted by angry crowds as their helicopters landed at the resort on Thursday, June 9. Most had planned to arrive Wednesday afternoon, after leaving their “cover meeting” of NATO countries in Brussels, Belgium. But frequent, heavy rains kept the copters grounded. Bilderberg traditionally has a “cover meeting” so, for example, outgoing Defense Secretary Robert Gates can attend a NATO session and slip, unnoticed, into the Bilderberg meeting. Gates addressed Bilderberg on Friday, June 10.

Gates had said the same things to the NATO crowd he later said at Bilderberg, calling for more aerial combat actions by allies even as the United States confines itself to a backup role. Gates called for more effort by the Netherlands, Spain and Turkey and urged Germany and Poland to join the war.

Gates’s hour-long speech at Bilderberg was mentioned by The Financial Times. His audience, however, was described only as a “gathering of dignitaries.” He said the European NATO members face “the very real possibility of collective military irrelevance” as a superpower unless they contribute more money and troops.

Washington has frequently requested, “with exasperation,” that European NATO countries meet the alliance’s benchmarks for defense spending, Gates said and called the situation in the current campaign in Libya “unacceptable.” He said “the blunt reality is there will be dwindling appetite and patience in the U.S. Congress—and in the American body politic—to expend increasingly precious funds on behalf of nations that are apparently unwilling to devote the necessary resources to make the necessary changes to be serious and capable partners in their own defense.”

NATO has degenerated into a “two-tiered” alliance with the United States and a small group of European allies doing the tough jobs while others benefit from NATO’s protection without bearing a fair share of costs and risks, Gates said. “This is no longer a hypothetical worry,” Gates said in one of the harshest speeches ever delivered at Bilderberg.

When Bill Clinton, a Bilderberg attendee, was president, NATO became the UN’s standing army, operating anywhere in the world on the orders of the Security Council. Under the UN, NATO invaded Yugoslavia. Under its charter, NATO is a defensive army only. But the first weapon fired in anger was an offensive war under direction of the UN.

Bilderberg has forgiven Barack Obama for hesitancy about what is now “his war.” They understand the political delicacy in Washington but, as one said, “he’s a good soldier and he’ll follow orders.”

Obama was praised for doing Bilderberg errands on his visit to a summit of the Asia-Pacific Economic Cooperation forum in Hawaii. A major Bilderberg goal of establishing a world government is to create an Asian-Pacific Union following an American Union, both patterned after the European Union superstate. Even as Bilderberg gathered, OPEC nations were following orders to keep oil prices pumped up to assist the goal of raising U.S. prices to $7 a gallon. While making clucking sounds about holding down prices, OPEC allowed a slight, momentary dip as a public relations gesture.

But Saudi Arabia maintains 3 million barrels a day of spare capacity. This did not fool Frank Verrastro, director of the energy program at the Center for Strategic and International Studies, which is traditionally a Bilderberg collaborator.

“I think there’s going to be a lot of theatrics, but beyond that I don’t think it affects the outcome,” Verrastro said. “If OPEC becomes less cohesive, that means each country goes its own way on production.”

“All these countries need money,” said Fadel Ghett, oil analyst at Oppenheimer & Co. “They will produce as much as they can get away with without destroying demand.”

The French agreed in principle to subscribe to new issues of Greek sovereign debt to replace maturing bonds if all creditors do the same. The move could provide a way forward for involving private creditors in a Greek rescue program. But it falls short of a German demand for them to agree voluntarily on an extension of bond maturities. The French proposal echoes the thinking of the European Central Bank, which claims that a rollover of Greek debt, rather than a “reprofiling” with extended maturities, would be a good way for private creditors to be involved in a new deal. French banks are among Greece’s largest creditors.

But the German government reaffirmed its determination to persuade bondholders to contribute more to a rescue. They called for a seven-year voluntary extension of maturities.

Jean-Claude Trichit, president of the European Central Bank, told fellow Bilderbergers that Europe needs a “Eurozone treasury secretary” with independent authority over all EU banks to avoid further crises like those of Greece, Ireland, Portugal and Spain. There is no time, when a crisis erupts, for the nations to come to a voluntary agreement, he said, because such a treasury department would have to act swiftly and with authority to impose bailout actions.

There was modest attention to China and Japan, relative newcomers to Bilderberg. In response to the explosions in Japan’s nuclear power plants, there was talk of imposing global rules on safety inspections. On China, there was talk of enjoying huge profits by bringing materials from slave-wage countries in Africa to be made into finished products by Chinese labor (itself relatively cheap).The finished product would be sold in the United States, where unemployment rates unofficially exceed 15 percent.

Craig Mundi, a Microsoft executive, complained about China establishing rules that favor building electronic gadgets at home and selling them without foreign competition. Another who Bilderberg tried to hide by keeping his name off its “official list” was Bill Gates, a self-made billionaire computer nerd who founded Microsoft.