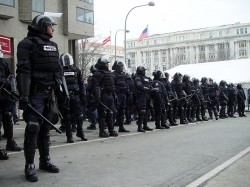 Do you love liberty and freedom?  If so, you better watch your back.  The control freaks that run our society are stripping away our liberties and freedoms a little bit more each day, and lately they seem to be particularly focused on coming after those that are not “integrating” into the system.  Just like the rest of the world, America is being transformed into a “Big Brother” police state control grid.  Nearly everything that you do is being watched and monitored.  A whole host of organizations know that you are on this website right now.  If you want to go to an NFL game next weekend, there is a good chance that you will be on the receiving end of an “enhanced pat-down” and if you are producing raw milk on your farm there is a good chance that the feds will show up for a pre-dawn raid on your property.  In many areas of the country, the government forces us to shoot our kids full of vaccines and implant dangerous microchips in our pets.  Virtually wherever we go there is a camera that is watching us or there are other Americans that are evaluating whether or not we are engaged in “suspicious activity” that needs to be reported to the government.  Once upon a time, was all about liberty and freedom, but today our nations are undergoing a radical cultural shift.  World is being “locked down”, and those who love liberty and freedom should watch their backs.

Once upon a time, our founders thought that they were guaranteeing our freedoms by adding a Bill of Rights to the Constitution.

But today there are a lot of freedoms that we simply do not have any longer.

Today, you do not have the right to say whatever you want.  If you say the wrong thing on a blog or a website it can have dramatic consequences.

Today, you do not have the right to do raise your own children as you see fit.

Today, you do not have the right to be free from unreasonable search and seizure.

Today, you do not have a right to privacy.  In fact, you should expect that everything that you do is watched, tracked, monitored and recorded.

If you doubt any of the statements above, just check out the examples posted below.

The following are 12 signs that Americans who love liberty and freedom should watch their backs….

#1 A 55-year-old man in Arizona was recently ordered to turn in all his guns because of things that he wrote on his blog.  Fortunately, after WorldNetDaily covered the story there was an outpouring of outrage and the order was overturned, but what would have happened if WorldNetDaily had not covered the story?

#2 According to Mike Adams of Natural News, the CDC is starting to call parents all over the nation to question them about the vaccination status of their children….

The U.S. Centers for Disease Control, which has been comprehensively exposed as a vaccine propaganda organization promoting the interests of drug companies, is now engaged in a household surveillance program that involves calling U.S. households and intimidating parents into producing child immunization records. As part of what it deems a National Immunization Survey(NIS), the CDC is sending letters to U.S. households, alerting them that they will be called by “NORC at the University of Chicago” and that households should “have your child’s immunization records handy when answering our questions.”

You can see a copy of the letter that the CDC is sending out to selected parentsright here.

#3 According to blogger Alexander Higgins, students in kindergarten and the 1st grade in the state of New Jersey are now required by law to participate “in monthly anti-terrorism drills”.  The following is an excerpt from a letter that he recently received from the school where his child attends….

Each month a school must conduct one fire drill and one security drill which may be a lockdown, bomb threat, evacuation, active shooter, or shelter-in place drill. All schools are now required by law to implement this procedure.

So who in the world ever decided that it would be a good idea for 1st grade students to endure “lockdown” and “active shooter” drills?

To get an idea of what these kinds of drills are like, just check out this video.

#4 According to licensed private investigator Angela V. Woodhull, hospitals are increasingly using “guardianship” to strip elderly Americans of their liberty and to rapidly drain their bank accounts.  The following is one story that Woodhull included in a recent article….

Ginger Franklin, Hendersonville, Tennessee, fell down the stairs in her condo and suffered a bump on her head.  She was declared “temporarily mentally incapacitated” and a guardian was appointed through the courts.  Within six weeks, the guardian had sold Franklin’s home, car, furniture, and drained her bank account.  Today, Franklin has her freedom back, but she is having to start all over.

#5 In a sign of just how far individual liberty in the United States has declined, a judge in Wisconsin has actually ruled that citizens do not have a right to grow and eat whatever foods they want to.  The following is a short excerpt from his recent decision….

1) no, Plaintiffs do not have a fundamental right to own and use a dairy cow or a dairy herd;

2) no, Plaintiffs do not have a fundamental right to consume the milk from their own cow;

3) no, Plaintiffs do not have a fundamental right to board their cow at the farm of a farmer;

4) no, the Zinniker Plaintiffs’ private contract does not fall outside the scope of the State’s police power;

5) no, Plaintiffs do not have a fundamental right to produce and consume foods of their choice;

#6 The freedom to raise our pets as we want to is also being greatly curtailed in many areas of the country.  For example, a new law in St. Louis would require nearly all dogs and cats to be sterilized and microchipped….

Board Bill 107 would require all pet owners to spay or neuter their dogs and cats and microchip them for identification. Those who don’t want to sterilize their pets would be assessed a fee of $200 per year.

Will the control freaks that run things want to start sterilizing and microchipping humans someday?

#7 Whenever any politician suggests that we should “suspend elections”, that should be a major red flag.  North Carolina Governor Bev Perdue recently made national headlines when she made the following statement….

“I think we ought to suspend, perhaps, elections for Congress for two years and just tell them we won’t hold it against them, whatever decisions they make, to just let them help this country recover“

#8 As I wrote about recently, many NFL teams are now performing “enhanced pat-downs” of fans before they enter the stadiums.  In Green Bay, the Packers are using hand-held metal detectors on fans before they are allowed to enter Lambeau field.

What is next?  Will they soon insist that we all undergo full body cavity searches before we are permitted to attend the games?

#9 Many Americans have complained about the horrible treatment that they are receiving at U.S. airports, but now the TSA is bringing their brand of “security” to many other locations throughout America as well.

#10 Many of our public schools are now being run like prisons.  In fact, in many areas of the country, little kids are being publicly arrested by police in their own classrooms and are being marched out of their schools in handcuffs.

#11 If you think that anything that you do on the Internet is private, you should guess again.  It has recently come out that Facebook continues to track most of the websites that you visit even after you have logged out of Facebook.

In addition, law enforcement agencies all over the globe are increasingly viewing social media as a law enforcement tool.  For example, the NYPD recently createda special “social media” unit dedicated to looking for criminals on Facebook and Twitter.

Also, many large organizations are now setting us very sophisticated systems that keep track of what is being said about them online and who is saying it.  For example, the new “Social Media Monitoring Solution” being developed by the Federal Reserve will identify “key bloggers” and monitor “billions of conversations” about the Fed on Facebook, Twitter, forums and blogs.

-missing a hand or fingers

According to WorldNetDaily, this document is part of a “series of brochures” that will be distributed “to farm supply stores, gun shops, military surplus stores and even hotels and motels.”

The Department of Homeland Security is spending massive amounts of money and running tons of ads to promote the “See Something, Say Something” campaign.

Apparently the Obama administration wants to turn the entire country into a vast network of government snitches.

They spend billions upon billions of dollars watching all of us, and yet now they also want all of us to watch each other.

It is not right.

I don’t know about you, but I don’t want to end up living in a society that resembles the novel “1984″ by George Orwell.

Sadly, the death of our civil liberties is very rarely mentioned by any of our politicians these days.

Both major political parties seem to have fully embraced the growing national security apparatus that is starting to suffocate the life out of this country.

Yes, we will always need security, but security measures should be implemented in such a way that they will never violate the liberty, freedom, honor or dignity of ordinary Americans.

In a previous article, I wrote the following….

If those in charge of our security right now cannot protect us without compromising our liberty, freedom, honor and dignity then they need to immediately resign and allow someone else to do the job.

If those running the security apparatus in this country right now feel like they cannot do that, then they need to step aside and let someone else take over.

The status quo is not acceptable.

Right now, all law enforcement personnel in this country are trained to bark at us like dogs and to treat us like cattle.

They are actually instructed to be mean and aggressive with us.  From the first day of training, they are taught to treat us like dirt.

Things were not always this way in America.  Once upon a time there was a clear distinction between the United States and “evil” totalitarian regimes.

If you love liberty and freedom, you better watch your back.

America is changing, and not for the better.